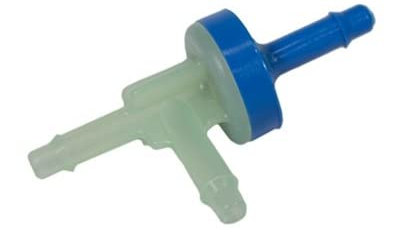 Driving our motor home during the hot summer heat requires a lot of work from the engines air conditioner, maybe even from out house a/c on the roof. If the engines a/c fails, it gets uncomfortably hot in the cabin – real soon. This is what happened to us and it happens a lot to proud Ford E350/450 owners. Because Ford has a bit of a weak point built in.

We had to go back and forth during our move to New Mexico. It’s about 700 Miles between our old and our new home. And it wasn’t a good time for our motor driven air conditioner to fail.

But it did and the rest of the trip was rather hot.

I soon discovered that it was not the a/c .. the belt driven compressor or any of the related components that failed, it was the dampener system that uses vacuum to open and close the flaps which direct the air flow.

It’s easy to check, because when the vacuum system fails, the cold air is directed to the dampeners default position – which is the de-frost setting. So – if you have cold air coming out of the de-frost vents (at the bottom of the windshield), this blog is for you.

The motor produces vacuum (depending on the RPM) the less the motor has to work, the more vacuum is available. That’s why sometimes you may get fresh, cold air streaming out of the dash vents, sometimes you don’t. If the vacuum system fails completely, you won’t have any cold air coming from the dashboard vents. Unfortunately, the vacuum reservoir and the one way valve are located deep inside your engine bay and it would require some major surgery to get to it

Sometime the one-way valve has failed, sometimes the vacuum reservoir is cracked or the hose is blocked – all of those elements are tucked away way down in the engine compartment. So – I opted to simply re-route the vacuum line and install a new vacuum reservoir under the dash in the passenger side area.

The first step is to locate the vacuum line running inside your engine bay along the seam right under the windshield. This line brings the vacuum from the engine.

Disconnect it and run it to the inside through the dog house. Find a hole or drill one from the engine compartment into the passenger area the feed the line through that hole.

Locate the vacuum line running to the dampeners (which sit on top of your dashboard right in the center. You can pop the cover open to look at them). The line comes through the passenger side door assembly and runs up to the dampeners. You will need to cut it.

The old vacuum line coming from the now disconnected reservoir in the engine compartment is routed through the passenger side door and runs up to the dampeners in the dash board. Watch for and don’t cut the radio antenna cable which might be there too.

Re-Connect the vacuum line from the motor to a new one way valve and to the line that feeds vacuum to the dampeners, than connect a new vacuum reservoir.

Stick everything nicely under the dash, close the covers, put the doghouse back on and you are done. You will now enjoy refreshing, icy cold air from the vents in your cabin.

It took me about an hours to fix the vacuum issue, the one way valve and a new vacuum reservoir are around $25.

Michaela has not received any benefits or special prices for writing this blog post.